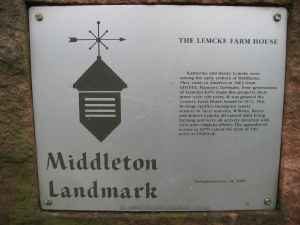 Stonefield Village (SW of the R.R.)

It began, it grew, and it got full. <– placeholder (More detail coming soon.)

Meanwhile, check out the aerials.

Stonefield Meadows (NE of the R.R.)

It was pretty much the same thing, but it didn’t take as long.

If you know the history, please let me know.

What’s up with that rooster?

Well, it’s because of the Lemcke barn.

From the historical marker:

THE LEMCKE FARM HOUSE
“Katherine and Henry Lemcke were among the early settlers of Middleton. They came to America in 1863 from GOLSTE, Hanover, Germany. Four generation of Lemckes have made this property their home for over 100 years. It was granted the Century Farm Home Award in 1973. This heritage typifies immigrant family settlers in rural America. William, Henry and Robert Lemcke all earned their living farming and were all actively involved with civic and religions affairs. The agricultural census in 1870 values the farm of 150 acres at $5600.00.”

From the Middleton Times Tribune:
The original structure was a log cabin built in 1863 by Katherine and Henry Lemcke. In 1874 the log cabin was replaced by a brick building. The current structure, erected in 1901, is a two-story Midwest country house made of Watertown brick. — August 22, 1991

In 1998, workers hired by Sveum Enterprises refurbished the home. They gutted the building, retaining the shell and support structure. They added a garage, attached by a breezeway. A new front porch was constructed in keeping with the turn-of-the-century architectural style. — March 12, 1998

END_OF_DOCUMENT_TOKEN_TO_BE_REPLACED

We use Nextdoor as another tool to help Stonefield residents keep in touch. Click the link below to log in or register.